A fundamental theme in future artificial intelligence (AI) research is to the ability to generalize enough to cope with situations without sufficient experience. The technical foundation for such ability is imagining inferring various images that diverge from reality by flexibly combining representations, which can be referred to as “the eyes of the mind”.
Most research on human imagination has been conducted as a part of consciousness research. In the 2010s, the number of attempts to model consciousness based on a deep generative model has increased. On the other hand, consciousness researchers have some points of contact with traditional AI research, such as planning and modal logic.

Given such a history of consciousness research, newcomers must understand closely related fields such as neuroscience and cognitive science. This can be a high hurdle to overcome for most AI researchers to enter this area. However, it is apparent that there exists worthy knowledge that can promote research targeted to building general artificial intelligence.

In this tutorial, titled “Conscious AI: Significance and Development”, the development of artificial consciousness and its significance will be shown with minimum reference to related fields of science, and focus on the aspect of general intelligence. In this tutorial, three lecturers will provide reviews on previous researches and share the current development status such as modeling, theory, and computational neuroscience related to consciousness, including deep generative models. In addition, lecturers will describe each strategy of artificial consciousness construction. 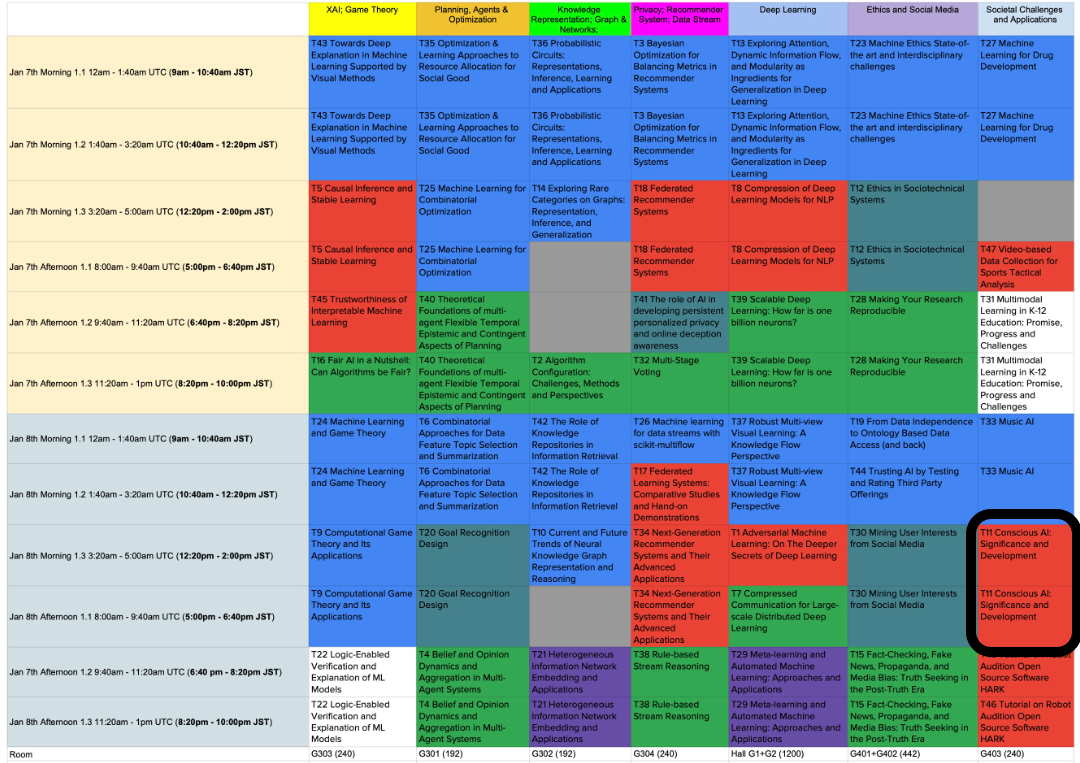 What is the relationship between consciousness and intelligence? However, there is no established hypothesis about the relationship between consciousness and intelligence. In this tutorial, we will present an overview of recent progress in scientific studies of consciousness in neuroscience for AI researchers. Specifically, we will first introduce the key problems and concepts in consciousness research such as the Hard Problem and Neural Correlates of Consciousness (NCC) while presenting relevant empirical findings to illustrate key points. Then, we will cover several theories of consciousness such as global workspace theory and integrated information theory. Finally, we will discuss how ideas in those theories may be relevant for future AI development as an inspiration for various ways to achieve artificial general intelligence as defined as a form of transfer learning that utilises previously learned components to solve novel problems efficiently. Furthermore, we will also address the possibility of implementing consciousness into AI from theoretical and philosophical viewpoints.

2. Imagination Architecture and  Consciousness  in the Brain ( Hiroshi Yamakawa )

The great nature of Artificial General Intelligence (AGI) is that it can explore a frontier of knowledge for humanity by creative ability. To realize this ability, AGI should have a wide range of imagination capabilities. However, building a general-purpose system is not easy, because the system becomes more specialized as we build it more. To build human-level general intelligence, using the restriction of brain information processing as prior knowledge for machine learning systems is reasonable. Since the 20th century, in the field of computational neuroscience, research on simulation/emulation that reproduces neural activity in the brain has started. After the explosive advance of deep learning, AGI research based on neural networks has increased. The rapid accumulation of neuroscience findings also boosts this acceleration. The NPO to which I belong promotes the development of brain-inspired AGI compliant the whole brain architecture approach. In order to promote cross-disciplinary R & D, our organization tries to describe requirements specifications of the entire brain for brain-inspired AI software called the brain reference architecture (BRA). Finally, brain architecture research related to consciousness and imagination, through this approach is explained.

3. Generative Models as the Neural Origin of Consciousness ( Masataka Watanabe )

The main goal of the talk is to introduce an experimental method to test various hypotheses on consciousness. Inspired by Sperry’s observation that split-brain patients possess two independent streams of consciousness, the idea is to implement candidate neural mechanisms of visual consciousness onto an artificial cortical hemisphere and subjectively test whether conscious experience is evoked in the device’s visual hemifield. That is, we replace one hemisphere of our own brain with a mechanical hemisphere which candidate hypotheses of consciousness are implemented, and subjectively test whether we perceive a unified consciousness—say, whether the right and left visual fields appear as a unified whole. If we do, then we can conclude that consciousness resides in the mechanical hemisphere, and that it is linked with the consciousness in the remaining biological one. The test is valid under a widely believed assumption that intact non-split brain functions as a “master-master” system in regard to visual consciousness.

Three speakers talk about the future after the brain-inspired AGI with consciousness is realized. Themes include social acceptance of artificial consciousness and the issues it poses.

Kanai’s primary research area is in Neuroscience and has published over 150 peer reviewed papers with h-index of 53 and total citations > 9000. (see Google Scholar: https://scholar.google.co.jp/citations?user=zaAL6YEAAAAJ).
His recent publications focus on information theoretic approaches to consciousness demonstrated by conference papers and peer reviewed papers in relevant areas such as intrinsic motivation (Magrans de Abril & Kanai, 2017 in ICIIBMS, and 2018 in IJCNN), integrated information theory (Kitazono, Kanai, & Oizumi, 2018 in Entropy), and information generation (Kanai et al., 2019, Neuroscience of Consciousness).
Kanai is also an expert in deep learning, and deep reinforcement learning from the application perspective as he leads a team of ~40 AI engineers and researchers in his research focused startup, Araya, Inc.

Hiroshi Yamakawa is a researcher who has been studying the boundary area between neuroscience and artificial intelligence for many years mainly in Japan.  He received a Ph.D. in 1992 about “reinforcement learning”. In the 1990s he worked on research on artificial intelligence and neural networks as a researcher at a Japanese company (FUJITSU) and a national project (Real world computing).  In the 2000s, he conducted research on bioinformatics and opinion aggregation technology and receives the Best Paper Award, the Anniversary Best Paper Award and the Anniversary Project Award from the Japan Society for Artificial Intelligence (JSAI). Utilizing his expertise, he worked as a coordinator for a joint project “The Brain Research to Understand the Intuition of Shogi Players” between FUJITSU and RIKEN.  In the 2010s, he co-founded the special interest group for the artificial general intelligence at JSAI, and also, he served as editor-in-chief at JSAI. Since the establishment of the NPO Whole Brain Architecture Initiative in 2015, opportunities for international lectures and academic presentations related to brain-inspired AGI have been increasing.

Graduated from the University of Tokyo Graduate School of Engineering in 1998. Following appointment as an assistant in that year and assistant professor in 2000, he studied at the California Institute of Technology, and he currently holds positions as Associate Professor in Neuroscience at the Graduate School of the University of Tokyo and as Visiting Researcher at the Max Planck Institute. He specializes in neuroscience, and is engaged in a wide range of theoretical and experimental research with a particular focus on consciousness. He has been published in leading scientific journals such as Science[2], and his book Brain Consciousness, Machine Consciousness[1] has received high praise. He co-founded MinD in a Device with Nakamura to realize the concept of consciousness uploading as the culmination of approximately ten years of research.

Supported by The Whole Brain Architecture Initiative, Araya and MinD in a Device