In 2015, a number of organizations (including WBAI) were established, purportedly aiming for AGI development.  Now three years have passed, and the conspicuous activity in this field is in the direction of tackling issues by extending deep learning.  DeepMind and OpenAI are representatives for leading technological development

s in this direction, gathering outstanding researchers and engineers from all over the world with ample funding.

As shown in Figure 1, DeepMind (a private company) is actively working on AGI inspired by the brain, while OpenAI (an NPO) is working in a different manner.  WBAI’s budget, which is approximately six million JPY/year, is meager and differs thousands of times from those of Deep Mind and Open AI.  Even when combining budgets of WBAI’s collaborators such as Dwango and Riken,which make it approximately ten times larger, there is still a gap of hundreds of times. 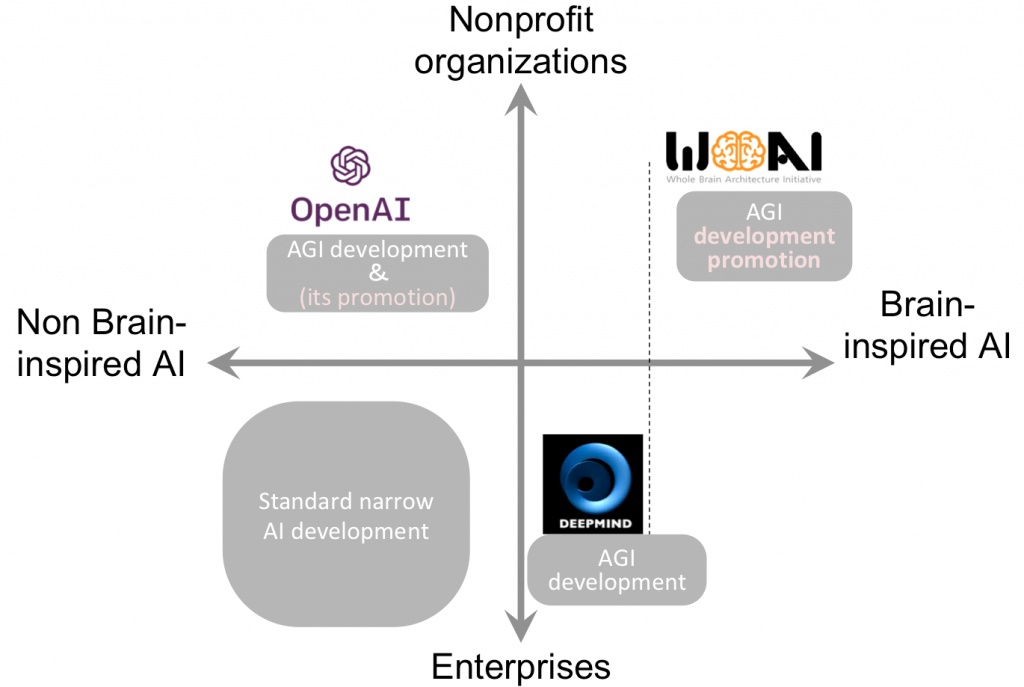 WBAI is concentrating on “development promotion” with its characteristics as a non-profit organization.  While its direction is to promote development based on machine learning similar to other organizations, it reflects neuroscientific knowledge more in detail.

In such a situation, there is significance in that WBA as an NPO holds the vision “to create a world in which AI exists in harmony with humanity” and carries on the development promotion of AGI that contributes to humanity over the long term.

In the future, it is imagined that a combination of various artificial intelligence developments will perform most intellectual and production activities, whereby large benefit will be created.  In order to bring about the situation in which people in the future can universally enjoy the benefit, the AI complex should be a public servant for all of human society.  This public servant will not be only to administrate governments, but also bring all of the benefits as a system.  To that end, people should jointly and democratically develop the AGI that will play a central role in the AI complex, and prevent the monopoly/oligopoly of the technology (see Figure 2).

In order to bring about such a situation, leading and promoting democratic development, rather than developing AGI by itself, would make effective leverage.  Activities that achieve these kinds of social missions can be pursued more purely in non-profit organizations. 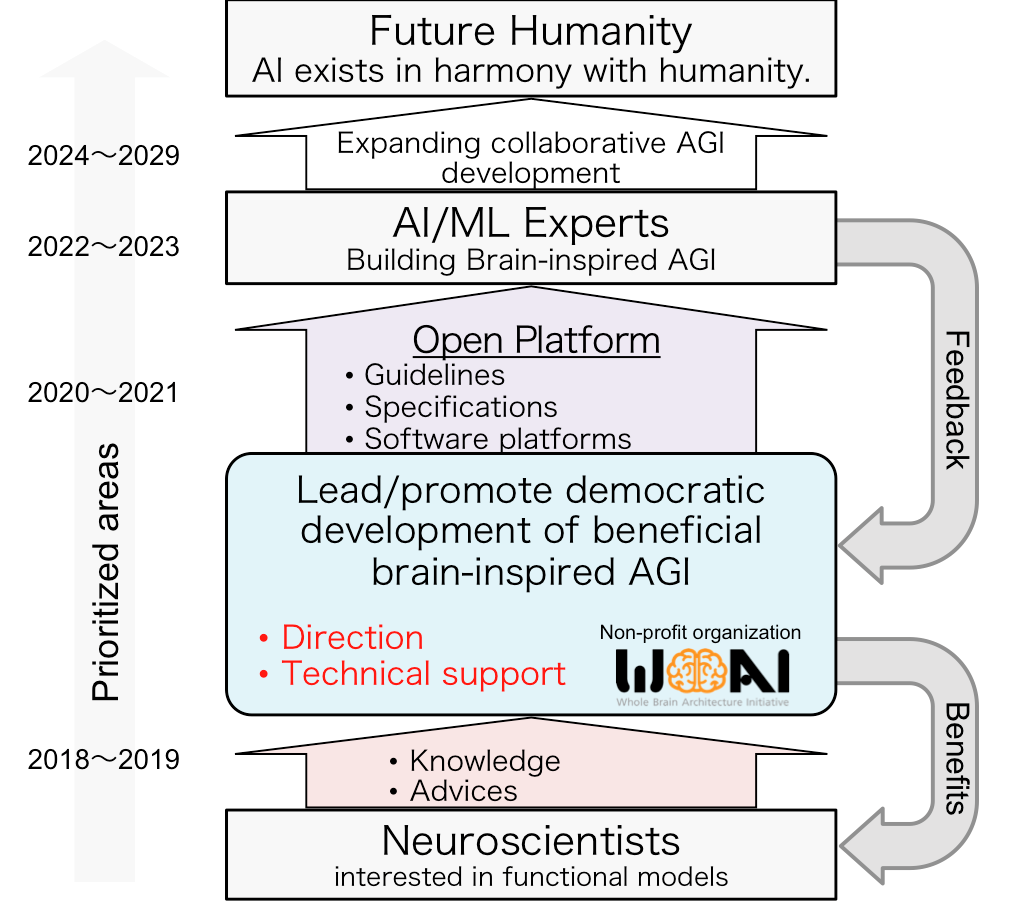 Figure 2: Prioritized areas in making a development environment for brain-inspired AI
(as of FY2018)

WBAI is trying to fulfill this role by promoting the development of brain-inspired AGI.

The brain-inspired approach is guaranteed to reach AGI by making it resemble the brain up to a certain stage.  However, the following problems have become apparent in our trials of the approach up to now.

WBAI is attempting to overcome the problems for brain-inspired AGI development.  The first two are problems commonly occurring in AGI development, and we are trying to address them by using the brain-inspired architecture as a foothold.  The third one is inherent in brain-inspired AGI, and without overcoming it, WBA development will not proceed.  In FY2016, we set the “Ten Thousand Engineers Plan,” aiming to address this issue by training people to have knowledge in both neuroscience and AI/ML through seminars and hackathons, but it turned out to be difficult to find talented people.  To overcome this issue, in FY2017, we decided to steer into the direction of translating neuroscientific knowledge into a form which can be understood by AI/ML experts.

In FY2018, as an overall policy, we will continue to lead and promote safe AGI development learning from the brain.  We will refine methods (i.e., technologies and know-how) as the basis for large-scale democratic development in the long term.  We also aim to establish brain-inspired AI in places for democratic development such as hackathons in a biologically plausible manner.  Our solutions to the three problems in the current prioritized area are as follows.

To solve the problem of the “roadmap”, we will survey the overall picture of development including the point of arrival, and plan to materialize it.  It will include tasks for measuring development progress and the development of evaluation indices.

To solve “the trap of specialization” issue, “refactoring” will be made with the brain.  That is, even if different modules are created in various projects, if their functions are equivalent to a certain part of the brain, a merge refactoring will be done.

Objectives besides the prioritized areas above include the following.  The educational businesses shall be carried out as before. The software platform for joint development will be expanded.   The basic ideas of WBAIestablished for beneficial AGI shall be shared with more individuals and organizations.   The number of appropriately skilled engineers who can develop AGI technology will be increased.

We shall continue activities of the previous year, by holding seminars, an annual hackathon, and an annual symposium.

WBAI is engaged in the development of research infrastructure such as software to support research in the WBA approach.  The following activities promote research by external research institutes.  One is to develop an integrated software platform for building WBA.  Another is neuroinformatics to acquire neuroscientific knowledge and develop it as information useful for brain-inspired AI (to address the issue of knowledge and human resources above).

In promoting R&D for AGI, it is important to be able to see the path to AGI (see the roadmap issue above).  For this reason, we collaborate with external researchers to numerate and organize the cognitive functions (capabilities) necessary for AGI.

Various modules are required for the R&D of brain-inspired AGI.  Since it is difficult to implement all modules with machine learning capabilities from scratch, we first attempt to implement modules without learning functions and then gradually replace them with machine learning capabilities where appropriate.  We will refactor the system with constraints of the brain (to address the trap of specialization issue mentioned previously).

To expand democratic AGI development, we would like to build an integrated development environment on which AI/ML experts can jointly develop brain-inspired AGI with ease in a few years.  In FY 2018, we will start working on basic ideas for it, while carrying out the R&D businesses above.

We publish Requests for Research(RFRs) in brain-inspired AGI with ProjectAGI, an AGI research organization with which WBAI became a partner in 2017.  RFRs also have the role to show the path leading to realization of AGI.

We sponsor the BICA (Biologically-Inspired Cognitive Architecture) 2018 conference, which is highly compatible with the WBA approach.

In 2015, when WBAI was founded, AGI development became activated globally, and active research continues in several organizations up to the present.  However, there are difficulties in building an R&D strategy to reach AGI, and it seems that it will take some time for it.  Under such circumstances, our development strategy is to build AGI on the architecture of the entire brain, an approach which is unique from a global viewpoint.  While this strategy has difficulties in incorporating neuroscience into development, we have gradually gained a prospect of how to proceed over the past few years of experience.  With this strategy, once brain-inspired AGI development starts, it will be boosted with the latest neuroscientific knowledge, and gradual refinement to make WBA resemble the brain will eventually reach AGI.

Under these circumstances, as an NPO aiming to realize AGI in harmony with humanity, it is a great significance to lead the democratic development of beneficial brain-inspired AGI, so we believe that we will have effective leverage.  In FY2018, we will study methods for brain-inspired AGI development, provide a place for development, and develop human resources.

We have received considerable support from companies, investors, NPOs, policy makers, researchers, engineers, supporters, and individuals.  We are deeply grateful for this, and we would like to further advance with them while deepening communications in the future.