The goal of the educational business is to help people who conduct research on the WBA approach on a long-term basis. In the first year, WBAI held the first hackathons and WBA seminars; participated in BICA 2015 in Lyon; and started creating learning material on the Web (in Japanese).

WBA Seminars
WBA seminars (Japanese site) have been held since before the foundation of WBAI.
In the first year, WBAI held three seminars with the following themes and speakers (mainly in Japanese):

The First Hackathon
Together with the Whole Brain Architecture Future Leaders, WBAI held its first hackathon at the Yokohama campus of Keio University for five days from September 19. Seven teams consisting of mainly undergraduate and graduate students participated in this event. Each team set their own task to meet the theme “development of a combined learner” and worked on it while staying in lodging facilities on campus. As one of WBAI’s educational activities, this event aimed to improve the knowledge and skill of the participants and provide an opportunity for social networking among students and researchers interested in areas such as neuroscience and machine learning. The event received support from AIST, the University of Electro-Communications, and AlpacaDB, Inc., as well as additional backing from the Dwango AI Lab (Dwango Corporation). The products of the hackathon have been published on GitHub in English.

Participating in BICA 2015
The BICA Society is an academic community on biologically inspired cognitive architectures (BICA) that holds international conferences annually. As WBA is apparently BICA, their theme accords well with ours. The BICA 2015 conference was held in Lyon, France, where five regular members and a WBA Future Leader participated as authors of submitted papers [1, 2]. There was also a WBA special session in the conference. Moreover, WBAI invited three students, as the winners of the first hackathon, to present their work in the WBA session and write a report on the conference.

Compiling Learning Material on the Web
To disseminate basic knowledge for WBA in areas such as artificial intelligence, neuroscience, cognitive science, and machine learning, WBAI has been compiling glossaries (in Japanese) on its Web site. Furthermore, WBAI is collaborating with university educators in each area. At the end of FY2015, a glossary in machine learning has been ready.

The goal of the R&D business is to support research activities on the WBA approach.
R&D at WBAI
WBAI is actively working to develop research infrastructure such as software and databases to be used in research and make it public. In particular, WBAI is working on a generic software platform for constructing WBA, evaluation methods of AGI, learning environments for WBA, and infrastructure for neuroinformatics.

The generic software platform for constructing WBA supports a mechanism that performs cognitive functions while machine learning modules corresponding to brain parts communicate each other, according to the core WBA hypothesis described in Section 2.3. In particular, platform modules communicate with numeric vector values corresponding to signals transmitted in axons. In collaboration with Riken and Keio University, the effort to create this platform began in 2014. It was named BriCA (Brain-inspired Computing Architecture) and implemented in Java (Version 0), then Python (Version 1), and currently in C++ (Version 2).

Together with the BriCA platform, a language that describes its architecture has also been designed and implemented. This BriCA Language describes modules and connections among them for WBA platforms. Such an architecture description language facilitates the understanding and module modification of architecture implementation, and would work well with open, collaborative development. While the current implementation of BriCA Language uses the BriCA platform, it can also use other platforms such as ROS, Brain Simulator TM, or Nengo, in which modules pass messages to each other. Dwango AI Lab has offered support also for the design and implementation of this BriCA Language.

Human-like AGI is expected to learn and acquire skills in a world similar to that in which human beings live. Though such a learning agent could be implemented as a physical robot, such a design may also require electro-mechanical engineering besides artificial intelligence. Therefore, in cooperation with the Dwango AI Lab, WBAI is working on robot simulators in the virtual world as learning environment for AGI. Some results from the first quarter of 2016 have been published on the Web. The first result is the creation of environments with the Gazebo robot simulator combined with BriCA, Nengo, or Brain Simulator TM (Fig. 1), and the second shows the Unity game engine combined with machine learning modules from Chainer APIs (Fig. 2). The latter is the first of the software series called Life in Silico (LIS). (Fig. 3)

Knowledge of the architecture of the entire brain is required to create artificial general intelligence on the WBA approach. In particular, the knowledge (information) on the parts of the human/mammalian brain, microstructure of the parts, and interconnection between parts (connectome) are all required. Much of this knowledge already exists but is scattered across countless academic papers. To use it efficiently, this information should be integrated in one place. WBAI is working to centralize this information for improved knowledge integration.
WBAI is also developing a software prototype of a WBA viewer called BICAmon (Brain-Inspired Cognitive Architecture monitor), which shows the activities of parts of cognitive architecture as if they are parts of a brain. It interactively displays virtual brain parts and connections on a Web browser, while active parts in the corresponding cognitive architecture are highlighted. The viewer has been developed together with the Dwango AI Lab.
R&D on WBA
While WBAI does not conduct research on whole brain architecture itself, it supports others doing research using the WBA approach. One form of support is sharing discussion among researchers in areas related to WBA; WBAI hold discussion meetings inviting interested researchers and students. Areas of interest include affects and the hippocampus.

The balance sheet and cash flow for FY2015 are presented below (Table 1 and Table 2) (The official version is in Japanese).
The operations of WBAI have been financially supported by sponsors including private companies. (As of July 2016, it has seventeen sponsors consisting of enterprises and individuals.) Two of the founding supporters paid fee for five years, as recorded as Advance Received in the balance sheet.
The travel expenses, accounting the major part of the operating cost, were for the travel and lodging assistance for the participants of the first hackathon and BICA2015. The operating cost includes the cost for renting the hackathon site and honoraria for the menters at the hackathon and speakers at WBA seminars.
The expenses for rent of space, which was the largest expenses among the administrative expenses, were paid to Kadokawa, Co., from which we rent an office space. The expenses for office personnel have been paid in the form of subcontracting. The remuneration is paid to an accountant office. Outsourcing fees were paid for activities such as making posters and maintaining the Web site for the publicity.
The accounting for FY2015 was in surplus. This is partly due to the fact that the period was shorter (seven months and ten days) than a normal year and only one person was employed until December 2015. While the accounting for FY2016 will be on the balance according to our estimation, we should yet solidify the accouting basis for extenging activities. More concretely, we would have to gain more financial supporters, implement profit-making businesses, and review cost-effectiveness. 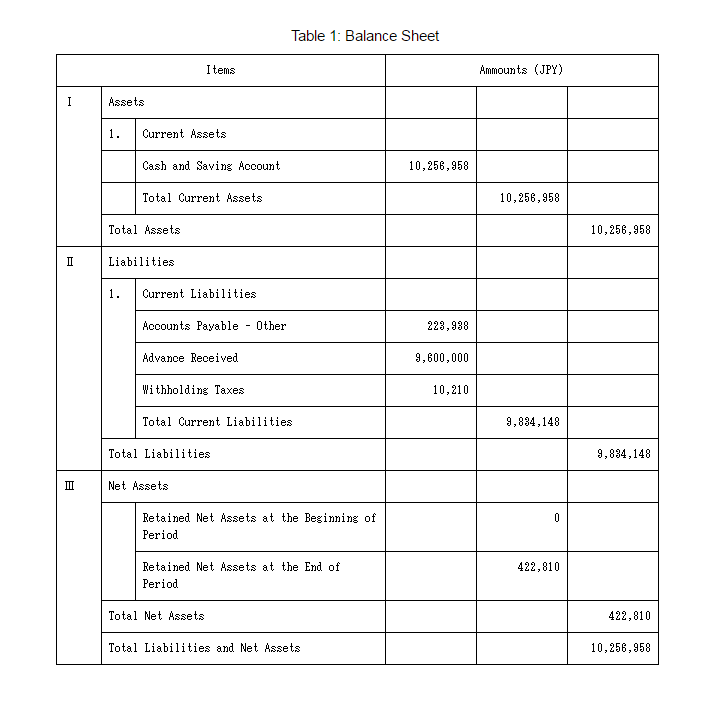 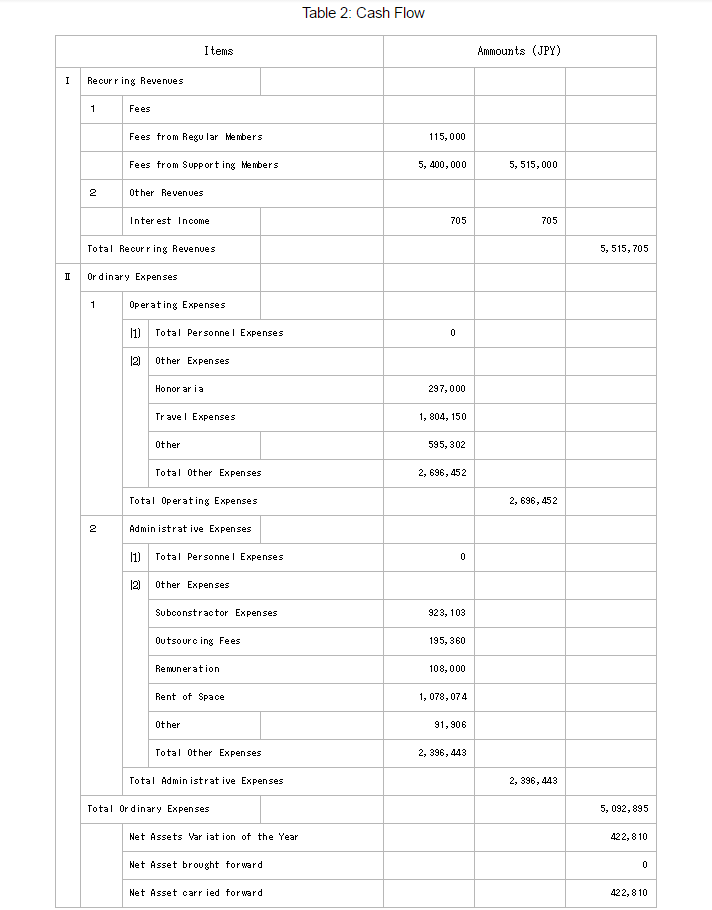