A technical goal for Artificial General Intelligence (AGI) is, as its name suggests, “to create a single AI system that performs multiple tasks.” Last year, we saw an AI system that can solve multiple tasks in language and image processing with a large-scale model (Foundation Model) using deep learning (*1). The idea that so-called Proto-AGI or Weakly General AI will be realized as an extension of the Foundation Model within a few years is also emerging.

*1 We commented on Gato, an AI system announced by DeepMind, that it experimentally demonstrated that a single AI system could learn a wide range of common sense knowledge from labeled multimodal data [1].

However, there is still a distance between them and the true AGI that we should aim for, and they have not reached the level of human-like agents to be accepted in human society, nor the level of understanding in mathematics and physics like humans. True AGI must deal with new or complicated tasks by constructing hypotheses by efficiently combining, transferring, and extending diverse knowledge found in domains. Opinions are divided as to whether such unrealized intellectual abilities can be realized by expanding deep learning. Some of these capabilities may be found in the architecture of the brain. The brain-inspired software that WBAI aims to realize also has its own value in applications such as personal interaction, mental disorder modeling, and mind-uploading.

With this background, WBAI will continue to conduct its educational business and R&D business to promote the development of human-like AGI for the long term, by standing on the brain reference architecture (BRA)-driven methodology established to draw out the essence from the brain, the only existing general intelligence.

Last year, we made great strides in refining our BRA-driven development. The main result was the construction of a database (WholeBIF), albeit a provisional version, for handling the anatomical structure of the entire brain in an integrated manner. It is now possible to add knowledge to the representation of the inherently unique anatomy of the entire human brain. Notably, it became possible to add hypotheses on computational functions described by researchers in the HCD format to anatomical data extracted from WholeBIF, and make them mutually comparable.  Furthermore, the previously ambiguous description of the computational function of software components corresponding to organs in the brain was redefined in more detail as a description of “process,” the procedure for converting inputs into outputs, and “output semantics,” the interpretation of component outputs from the perspective of an external observer.  The process description provides software implementers with direct specification, while the output semantics serves as a guide for the process description. On top of that, a display tool called Function Tree Viewer was developed to display the descriptions hierarchically (see Fig. 1). 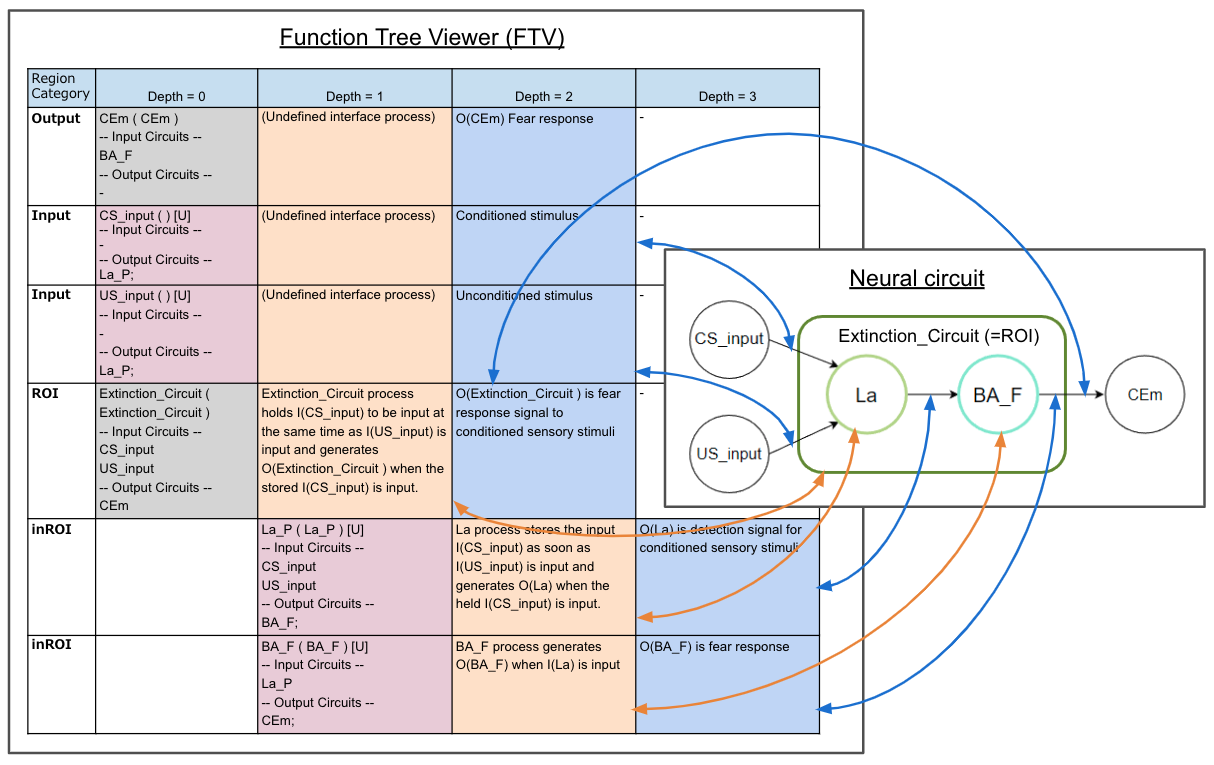 Last year, we conducted an educational business to develop human resources that bridge the brain and AI. We introduced BRA-driven development in a book in Japanese [2]. We also held three WBA seminars (in Japanese) with the themes of “Metacognition and the AI implementation of consciousness and its application to the next generation BMI,” “Aiming at the integration of multi-disciplinary knowledge of eye movement,” and “If an artificial brain has a mind.” We also held a WBA Lecture on the theme of “How to make a component diagram of the brain: Arrangement of inter-process relationships and description by probabilistic models” with the cooperation of Ritsumeikan University’s R-GIRO research program “Symbol Emergence Systems Science: Transdisciplinary Research Center for Real-World Artificial Intelligence and Next-Generation Symbiotic Society,” in which the whole brain probabilistic generative model [3] was presented by research program members (the model was also described in the aforementioned book [2]). The 7th WBA Symposium was held under the theme of “General-purpose robotics and brain-inspired intelligence,” where Tadahiro Taniguchi and Tetsuya Ogata gave talks, and a panel discussion on “Robotics referring to the brain” was organized by Tatsuya Matsushima, in which the participants discussed how future society should be based on the premise that advanced AIs that surpass humans in terms of autonomy and ethics will participate in the society.

In the Symposium, awards were presented for contributions to activities around WBAI. The WBAI Incentive Award was given to Hiroyuki Ohta, who showed that the learning rate for positive and negative reward prediction errors in the basal ganglia differed in animal experiments. The Awards for Meritorious Service for the NPO were given to Rena Fujii, who contributed to the supervision of the WBA seminar executive committee and to PR activities, and Koji Morikawa, who was the auditor of the NPO.

In 2023, we would like to proceed with the educational business and R&D support business as before. In the R&D support business, we shall advance the formalization of technical elements in work such as BRA design, software implementation, and evaluation in BRA-driven development, and automation based on the formalization. We shall also study data management and operation on the accumulating data. We would also like to widely advertise the design method for computational functions corresponding to the anatomical structure of the brain, which requires the software design skill, and to provide more opportunities for participation in the activity.

The activities promoted by WBAI are continued with the support and cooperation of people including supporting members, advisors, the WBA seminar executive committee members, SIG-WBA, and affiliated organizations. We would like to express our sincere gratitude to all. To note, from last year, some of our members started participating in the team “Analysis of Behavior Change using Brain Reference Architecture” of the Kakenhi project “Deciphering and Manipulating Brain Dynamics for Emergence of Behaviour Change in Multidimensional Biology.”
We look forward to your continued support and patronage in the coming year.