Our activities in Fiscal Year 2021 (from April 2021 to March 2022 — the sixth year) include educational and R&D businesses, implemented according to our policy for FY2021.

The goal of our educational business is to help people who conduct research on the WBA approach on a long-term basis.  In FY2021, WBAI held the sixth WBA symposium, two WBA seminars, and two WBA lectures (in Japanese).  Videos of the paid WBA seminars are distributed on Vimeo for a fee, and those from free events are distributed on YouTube.

The symposium was held (in Japanese) online on September 10, 2021 with the theme of “Toward Brain-inspired AI Coexisting with Humans” with speakers Masahiko Inami (The University of Tokyo), Takehiro Ohya (Keio University), Satoshi Kurihara (Keio University) and discussion with Koichi Takahashi (RIKEN, WBAI) and Hiroshi Yamakawa (WBAI).  There were also presentations by Hiroshi Yamakawa and Naoya Arakawa (both WBAI).

It was organized by WBAI and supported by MEXT “Brain information dynamics underlying multi-area interconnectivity and parallel processing.”

In the symposium, Ayako Fukawa was conferred the WBA Incentive Awards with her engagement in establishing the SCID method for BRA construction, and awards for Meritorious Service were presented to Naoyuki Sakai for his contributions to media/public relations, marketing planning, and regular reporting to supporting members, and to Satoshi Ueno for his contributions to the WBA Seminars Executive Committee (formerly known as the Supporters), by founding it and serving for it as chair.

In FY2021, WBAI held two seminars (in Japanese) with the following themes and speakers.

The Fifth WBA Hackathon — Beyond ‘now and here’ —

Between May and October 2021, an online hackathon was held together with Cerenaut, WBAI’s partner, to create a whole-brain architecture agent that solves tasks with working memory.

The goal of our R&D business is to support research activities in the WBA approach.

BRA-driven development uses the Brain Information Flow (BIF) diagrams based on the mesoscopic anatomical structure of the brain related to human cognitive behavior, and hypothetical component diagrams (HCDs), which describe computational functions consistent with the BIF (see the figure below).

Currently, we are working on BRA evaluation methods, BIF creation from connectome, development of a BRA description environment, BRA creation, HCD integration, and implementation of brain-inspired software, each of which is described in the following sections. The projects financially supported by the MEXT project “Brain information dynamics underlying multi-area interconnectivity and parallel processing.” are described as (BID). 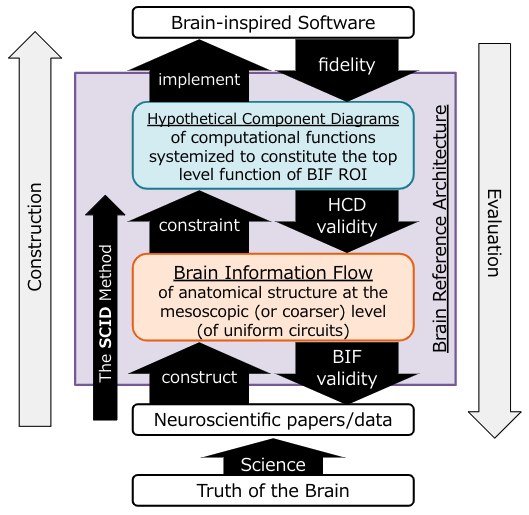 BIF data need tests to ensure the credibility of their projection information.  For such a method is not available at this stage, we attempted to create data to evaluate the credibility, and found that the data creation takes approximately 1 hour per projection (BID). We also systematized concepts in BRA-driven development.

Since we are aiming for human-like AGI, it is desirable to use human connectomes in describing the BIF for the basis for BRA-driven development.  However, we have to use information from other animals for anatomical information that is not available in the human brain, and so decided to create “SHCOM” connectome as defined below.  In FY2021, we conducted a basic survey to collect connectomic information on humans and other mammals in order to create a neocortical SHCOM (BID).

Supplemented Human Connectome with Other Mammals’ (SHCOM)
SHCOM is the most probable hypothesis about connections between brain regions at the mesoscopic level, the (average) number of axons, their directions, and in the neocortex, the feedback/feedforward directions, for the human brain.

From the viewpoint of efficient data production by BRA design projects working together in the future, we investigated the current workflow and proposed improvements, especially in the BIF creation process and its deliverables.  We also created a validation script for BRA data written by the creator of the BRA (BID).

We created BIFs for the cerebellum, eye movements, the claustrum,  conscious architecture, and speech-language segmentation.

Once BRAs for various brain areas are constructed, HCDs are described on the master BIF. So, it is necessary to integrate the HCDs into a consistent HCD for the entire brain, to construct the Whole Brain Reference Architecture (WBRA).  In FY2021, this issue was pointed out and studies toward the construction of the WBRA were initiated.

As the whole brain BRA is not complete, it is not possible to directly implement WBA as a system.  Meanwhile, we are conducting a brain-inspired software implementation in advance to make trials, evaluate, and determine the underlying framework and models, to confirm the feasibility of software development from HCD, and to further examine the biological plausibility of the software (BID).

As an application of BriCA, a general-purpose software platform for cognitive computing, we have implemented a combined learner consisting of models of the neocortex and basal ganglia loops (BID).

In a verification implementation of software design based on HCD, we found that the difficulty for implementers of selecting computational models and that information such as the coordinate system to use, dimensions, and time constants is often lacking in current HCD (BID).

WBAI has been collaborating with other organizations to develop research infrastructure such as software to support research using the WBA approach. In FY2021, we conducted collaborative activities in the following research and development. In particular, we developed the concept of the Whole Brain Probabilistic Generative Model (WB-PGM) in collaboration with the Grant-in-Aid for Scientific Research on Innovative Areas “Correspondence and Fusion of Artificial Intelligence and Brain Science” and published a paper.

Because of the potentially large impacts of AGI on humankind, we are conducting activities to make it beneficial, safe, and democratized.

WBAI activities such as WBA seminars have been conducted with non-paid volunteers including regular members, except for a paid part-time worker at the secretariat.

The balance sheet and cash flow for FY2021 are presented below (Table 1 and Table 2).

The businesses of WBAI have been financially supported by supporting members.  (As of March 2022, there were nine supporting members consisting of enterprises and individuals.)  The other incomes include fees from the participants of the WBA seminars.

Honoraria were paid to the speakers of the WBA Seminars.  The subcontractor/outsourcing expenses for operation includes the cost of R&D,  which was mostly carried out with the budget of exterior research institutions.  Prize was paid to the awardee of the WBA Incentive Award.

The expenses for secretariat personnel (shown in Subcontracting/outsourcing Expenses) were apportioned by 50% (50/50) for operating and administrative expenses.  The remuneration was paid to an accountant office.  The rent for the office was free of charge by courtesy of Garm Inc.