The Whole Brain Architecture Initiative (WBAI) believes that the shortest path towards the development of artificial general intelligence (AGI) is the whole-brain architecture approach to learn from the entire brain.  To promote the development of whole-brain architecture, we have held four hackathons. This year, we hold the 5th WBA Hackathon with the theme of working memory.  While working memory is necessary for ‘fluid’ cognitive functions such as planning, there are few computational neuroscientific or artificial neural network (ANN) models.  Thus, its realization with brain-inspired ANNs will be a fundamental challenge toward AGI.

Please see below for more information on the task.

Sample cognitive architecture code is given, which consists of a visual system and a reinforcement learner to model basal ganglia, and is able to solve a non-delayed match-to-sample task without active vision by being trained in the task environment.

The sample architecture provides empty modules (stubs) that correspond to brain organs.  Participants are to implement working memory by filling the stubs.  In case you alter the architecture, you have to provide thorough documentation.

The details of the sample architecture can be found here.

Registration should be team-based (consisting of one or more members).  Please create a team account on CodaLab and a team repository on GitHub beforehand and specify the following in the registration form.

You can register after trying out your code, recruiting team members, and/or communicating with the organizers and/or other participants, on CodaLab.

Hackathon Product to be Evaluated

After closing, the organizer will collect the latest version before timestamp GMT 24h00 from each team as their submission for evaluation.

During the hackathon, participants will be able to upload and try out their code on the CodaLab platform.  The evaluation will be made with the final score at closing.

Please explain your modification to the sample code (architecture) in less than 1,000 words of English text (figures are welcome) in the README.md of the team repository you have specified at the registration.

The source code on the GitHub repository at the deadline will be evaluated.  The environment part (to be specified here) should not be altered.

Evaluation will be made with the last scores on CodaLab and your justification on the biological plausibility in the README taken from the deadline snapshots on the GitHub repositories.

Prizes and cash (max. 100,000JPY) will be awarded to teams with outstanding results.

The submitted code is scored with the task environment.  The following criteria are used in the scoring:

Please refer here for the scoring details.
Scores will be used to evaluate the generality of agents as well as performance for each task.

Biological Plausibility will be mainly judged from the README describing alterations to the sample architecture.  Please make your code readable, as the consistency between the README and code will be checked.

WBAI generally uses the GPS criteria for evaluation, so we recommend you to look into it.  §3.3 and §4.2 of a paper from WBAI can be of help as well.

We solicit sponsors who can help the participants with awards.
Please contact us from here.

We will use a Slack workspace (to join, email us to hackathon2021 [at] wba-initiative.org) and the forum on CodaLab as a community for this hackathon.
If you have any questions, please ask them there.
Also, please use the Slack workspace or CodaLab’s team management features to help create your team.

Detailed information for the hackathon is found here.

The Architecture of Working Memory

While the mechanism of working memory has not been completely elucidated, the following might be said:

The screen to be presented to the agent consists of three sections (Figure 2). 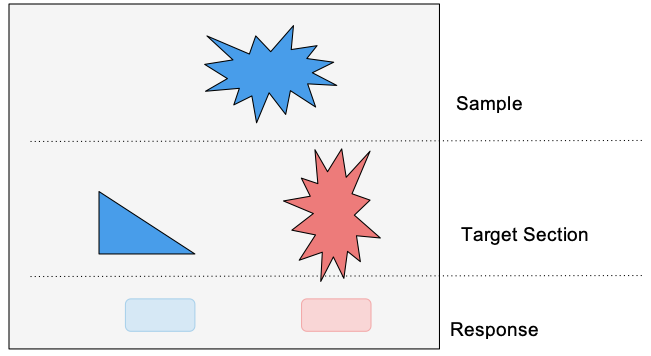 In the delayed sample matching task, the sample figure is presented without target figures at the beginning. 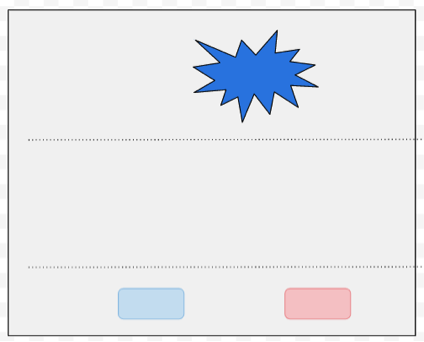 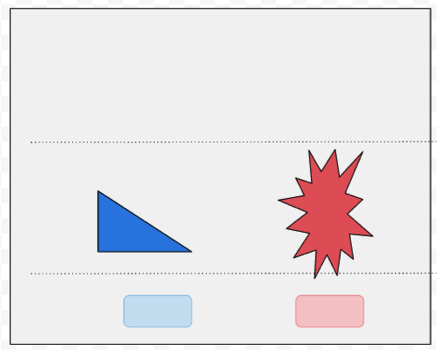 After a certain amount of time (up to a few seconds), the button corresponding to the correct target will flash (Fig. 5).  At this point, the targets are still visible. 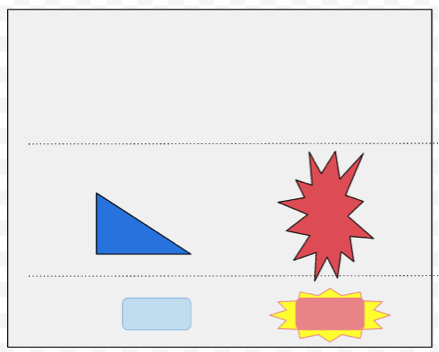 If the agent has responded correctly, it is rewarded.  The correct answer is to choose the button below the ‘same’ figure as the sample figure (in the example above, the shape of the correct figure is the same as the sample, while the color and orientation differ).

For a non-delayed sample matching task, the sample figure is presented during the selection of a target, where WM is still required as the agent has to retain information during gaze shifting.

The agent is shown one or more trials before main tests to learn which feature set (shape, color, or positional relation) to use for matching between the sample and target.

In a trial, the correct button in the response section flashes.

After trials, the entire screen flashes twice to enter the main test.

Participants can train their agents by designing pre-training sessions such as follows.

Each task has ten runs to use the average score.