RFR: An Actor-Critic Decision-Making Model with the Frontal-Cortex-Basal-Ganglia Loop

As intelligent agents make decisions, any project aiming to realize human-like AGI should model decision-making.  As we have been pursuing the WBA approach to create AGI by learning from the architecture of the entire brain, we request you to model the decision-making of the mammalian brain.  While a number of models have been proposed, we refer to O’Reilly’s model on his textbook for computational cognitive neuroscience (CCNBook hereafter) as the standard, where decisions are supposed to be made with the loop consisting of the frontal cortex, basal ganglia, and related areas, which reinforces decisions in an actor-critic way.

You are requested to implement a biologically-plausible yet computationally effective model for decision-making and action selection.  The model should serve as a reference model for other brain-inspired models of intelligence. Thus, its implementation should be as simple as possible for being used and maintained in the community.  We outline the structure of the model to be implemented in the Detailed Project Description section below.

The implementation will be judged with the following criteria:

The request is to implement a decision-making model consisting of the following modules: (They are refactored from the model in the CCNBook.) 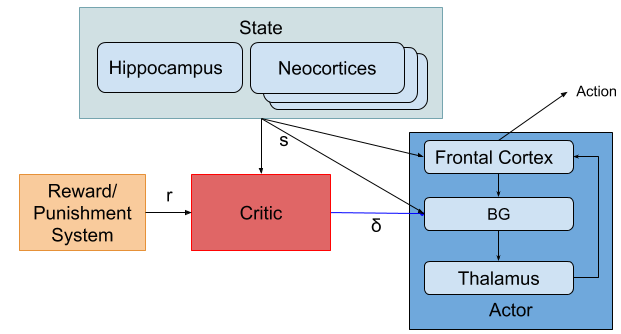 Figure 1: Overall diagram of the system
Both Actor and Critic contain parts of BG.

The model should have the following performance characteristics (see here for a discussion of these constraints):

You may use any well supported machine learning algorithms or open source frameworks for implementation.  You may prefer more biologically plausible algorithms such as those provided by emergent from O’Reilly’s group (i.e., Hebbian learning).  Note, however, your new implementation should have more usability than the original implementation in emergent.

We recommend Python for programming.

We request you to make modules well ‘encapsulated’ so that modules could be reused without large modifications and used in a hybrid framework environment (e.g., mixing implementation with TensorFlow and Caffe) for better interoperability among developer teams. For that matter, WBAI has been developing our own framework for brain-inspired computing (BriCA).

We invite you to discuss the tool issue with us before you start working on the request.

While currently we do not offer our own dataset or test batteries, the Executive Function chapter of CCNBook and the experiment library at psytoolkit.org refer to tests for decision-making models.  You can choose one or more tasks here to test your implementation.  Note that most of them require working memory so that they test working memory as well.

The following chapters of CCNBook are relevant to this RFR.

Note that O’Reilly’s model is also a model of working memory (PBWM: the Prefrontal cortex Basal ganglia Working Memory model).  Also note that the model presented here is a quite simplistic one for a starter.  The accumulator/ramping aspect of decision making would have to be also taken into consideration as in [Simen 2012].

For discussion, please join us in our reddit thread on Decision Making.