The following paper was featured in the press release：

(The following is a translation of the press release made under the responsibility of WBAI with permission from the University of Tokyo School of Medicine.)

Building software that reproduces human cognitive functions by referring to the neural circuits of the entire brain is considered to be of high value in human sciences such as cognitive science and neuroscience, as well as in engineering applications such as artificial intelligence and robotics.  However, the knowledge of brain science is vast and complex to be used with the abilities of particular individuals for software design.  In addition, the granularity of the anatomical descriptions in the findings of brain science must be properly aligned to cognitive functions.   Hiroshi Yamakawa, a visiting researcher  at the Department of Neuroscience, Graduate School of Medicine, the University of Tokyo, has standardized the Brain Reference Architecture (BRA) data format (Glossary 1), the specification for realizing such software, and the development methodology with it.  The methodology provides guidelines for the granularity of describing anatomical structures and a methodology for storing and sharing data on hypothetical computational functions designed based on these structural descriptions.  The accumulation and sharing of data in BRA format by the methodology is expected to facilitate the development and use of brain-inspired software.

Since the dawn of the field of artificial intelligence, more than a few AI researchers have dreamed of achieving human-level general intelligence, but that goal has yet to be achieved.  In the 2010s, when deep learning was developed, there were high hopes that it could be realized mainly by combining machine learning devices.  However, the design space for assembling computing devices is enormous, and the construction through trial and error is not easy.  Since 2014, the Whole Brain Architecture Initiative has been promoting a whole-brain architecture approach ‘to create (engineer) a human-like artificial general intelligence (AGI) by learning from the architecture of the entire brain,’ (see Fig. 1. in the published paper) and it was hoped that the approach could constrain the design space for AGI.   However, the methodology for building brain-inspired software based on knowledge in neuroscience was not clear in the beginning.  In those early years, three major challenges became apparent.  The first is that there are few people with expertise in both neuroscience and software development, and it is difficult to train them.  Second, the amount of knowledge in neuroscience that covers the entire brain is enormous, and it is impossible to design software that integrates the functions of the entire brain by relying on the cognitive abilities of individuals.  Third, in order to properly reflect the cognitive functions of the brain in software, the descriptive granularity of the brain to be referred to must be appropriately chosen.

Based on the challenges, we proposed the BRA-driven development methodology by dividing brain-inspired software development into two parts: collaborative design work of brain reference architecture (BRA, Glossary 1), and development work to implement and integrate software based on the BRA. Here, BRA is a standardized data format for the specifications of brain-inspired software. It mainly consists of data in the form of brain information flow (BIF, Glossary 2), which describes anatomical structures at the mesoscopic level, and one or more accompanying hypothetical component diagrams (HCD, Glossary 4) (see Fig. 3. in the published paper).

In this methodology, we first collect and organize papers and data in neuroscience to create BIF data, which is a directed graph in which nodes are “circuits” of various granularities in the brain and links are “connections,” which are axon projections between them, as shown in Fig. 4  in the published paper.  A connection can be any circuit as an endpoint, but only a uniform circuit, the smallest descriptive unit of a circuit, can be chosen as a starting point.  A uniform circuit defined through design is, in principle, a group of neurons consisting of a particular cell type in a certain brain region.  Neuronal activities in BIF circuits are described as NBP (Glossary 3).  A hypothetical computational function assigned to a BIF is represented in a hypothetical component diagram (HCD, Glossary 4).  More than one HCD can be assigned to any circuit on BIF.  In the current neuroscience, knowledge of anatomical structures is relatively well developed, and the SCID method (Glossary 5), which uses the knowledge to design HCDs, has the advantage of being widely applicable to areas of the brain.

By referring to HCD as a specification, developers who do not necessarily have a deep understanding of the brain can be involved in the implementation of brain-inspired software.  The biological plausibility of the software created in this way is assessed by whether its structure and behavior are consistent with the BRA.  In addition, the authenticity of the BRA itself are evaluated by corroboration from the findings in neuroscience.

As a result of this research, we have been able to present a methodology that effectively constrains the design space for brain-inspired software.  The more collaborators work with the methodology, the more rapidly the accumulation and sharing of data in BRA format will advance. The accumulated data is expected to be used for the computational understanding of the brain, development of cognitive models, development of artificial intelligence and humanoid robots, and applications in psychiatry and human-agent interaction.

For the realization of artificial general intelligence, which is the goal of the whole-brain architecture approach, a roadmap based on BRA-driven development was proposed (Fig. A, see below).  In order to achieve the goal, we need to build a system that covers almost the entire brain.  In the coming phases, we will build BIF diagrams that cover the entire brain, and assign one or more HCDs to each part of the BIF.  The next will be the initial implementation phase with the intermediate goal of developing software prototypes that will integrate the entire brain.  The subsequent development process will focus on the integration of software modules implemented in different projects and the tuning of combined software in various testbeds.  The integration of BIF-compliant software is expected to be efficient because the corresponding modules will be mapped to a brain organ.

Fig. 1. Basic scheme of WBA approach.  in a published paper.

Fig. A.  Roadmap to complete the whole-brain architecture through BRA-driven development.
In the first part of the BRA construction, BIF and HCD covering the almost entire brain will be constructed.  In the intermediate phase, the initial implementation of the WBA will be done with the constructed BRA.  In the second half of the implementation phase, the measures of AGI capabilities and architecture search techniques will be developed. 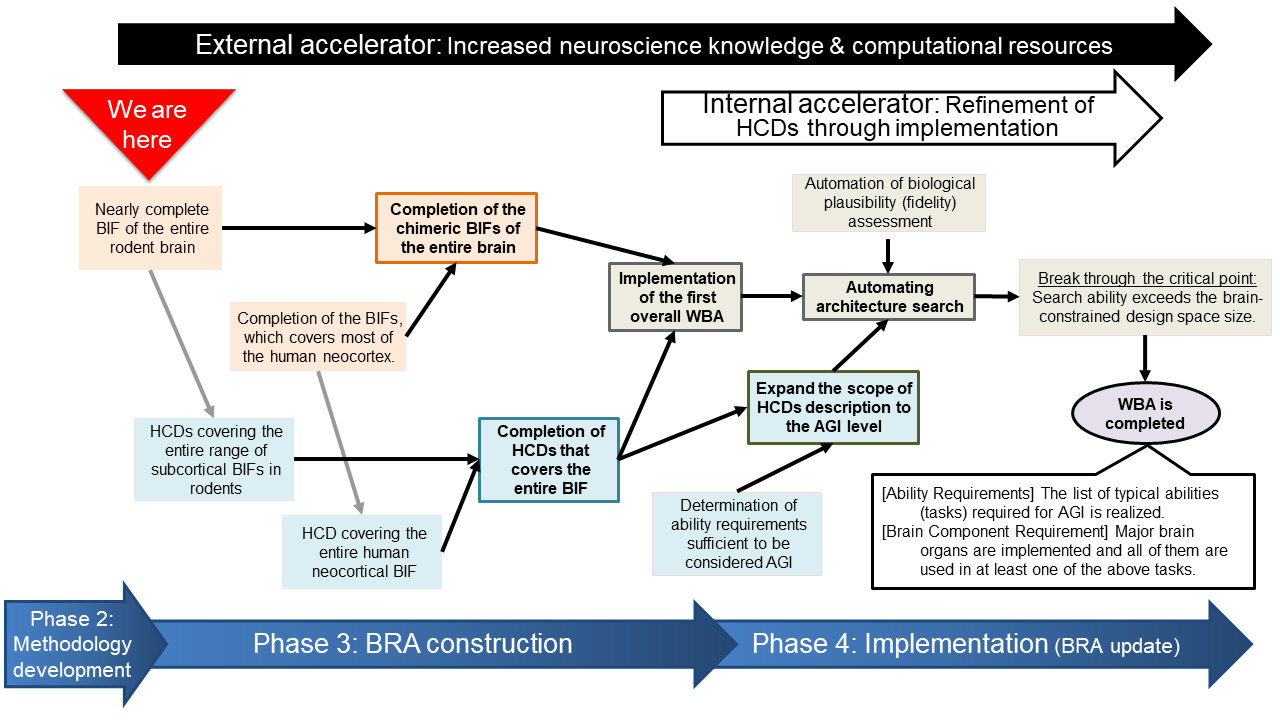