WBAI has been promoting democratic development of beneficial and brain-inspired AGI since 2015.  In 2019, we sponsored “Animal-AI Olympics” (backed by the Leverhulme Centre for the Future of Intelligence (CFI)), the contest to reproduce the versatile intelligence of animals.

In particular, we carried out the following:

Five teams applied for the WBA Prize and after the evaluation, the award was announced on the Competition Track Day 2 of NeurIPS on December 14, 2019.  The winner was Team IronBar (Guillermo Barbadillo), who scored 75 points in the overall rating of the GPS criteria that evaluates functional generality, biological plausibility, and computational simplicity.

This work uses the reinforcement learning model (Proximal Policy Optimization (PPO)) provided by the organizer as a sample code.  The mapping between functional modules and brain regions is as follows.

In this work, a simple spatial memory (the visited region map) was hard-coded, and a large number of training arenas were generated to perform sufficient learning.  It also achieved second place performance among all entries. While the applicant described the spatial memory as a grid cell map in the entorhinal cortex, its implementation was rather close to the hippocampal place cell map.

The average score of the WBA Prize was 63 out of 100 points.  The second place was Team BLAI (Takashi Sano) with 65 points, and the third place was Team Sirius (Dan Barry) with 62 points (who was at the 3rd place in the overall Olympics). 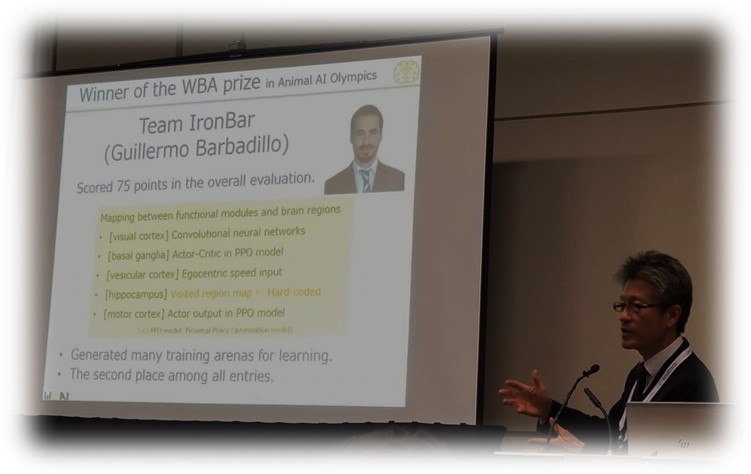 Looking over the applications, it seemed to be effective to make a large amount of learning after adding spatial memory to reinforcement learning.  This suggests the effectiveness of the architecture realized in the brain for basic tasks such as the spatial search.
Meanwhile, some hand-coded works attempted hierarchical learning, including meta-cognition and object persistence.  These attempts are steps in the direction for higher level intelligence.

Below, the review process of the WBA Prize is explained.