We continue to promote projects that use brain architecture as reference for the research and development of artificial general intelligence (AGI), which will have a great impact on our life. As described in detail below, we believe that this can be driven by the Brain Reference Architecture (BRA) driven development (see figure below), in which Hypothetical Component Diagrams (HCDs) as hypotheses on computational functions are assigned to Brain Information Flow (BIF) diagrams that represent the anatomical structure of the brain, and software is implemented by referring to the HCDs.

Here, the development must be along with our basic idea ‘to create a world in which AI exists in harmony with humanity.’ Thus, WBAI will continue to promote the development of brain-inspired AGI in a democratic manner, such as BRA design by contributors (mainly HCD creation and integration) and open software implementation. 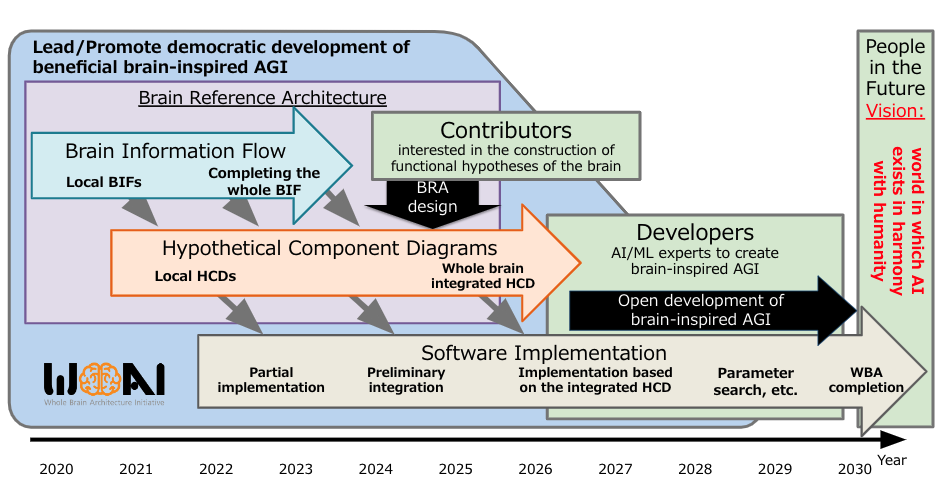 The following is the policy for our education and research & development businesses for the fiscal year 2022.

The objective of the education business is to develop and increase the number of interdisciplinary personnel with different expertise in AI/ML, neuroscience, and cognitive science necessary for R&D in the WBA approach over the long-term. We continue our regular activities of holding seminars and an annual symposium to raise public interest.

We will communicate our activities by participating in academic events such as the annual conference of the Japanese Society for Artificial Intelligence and Neuro 2022, and by cooperating with external academic groups. We will foster and involve human resources through cooperation with external researchers, engineers, and groups.

We will invite applications to the WBAI Incentive Award to recognize those who have made significant contributions to the promotion of brain-inspired AGI technology, thereby invigorating the community. We also plan to introduce the WBA approach in a cognitive science book. In addition, we plan to present our research on making brain-inspired AGI beneficial at local meetings.

The purpose of the R&D project is to accelerate democratic AGI research by facilitating external research on WBA approaches. Activities shall be conducted while avoiding conflicts with existing WBA-related research activities. The project will promote research activities by exchanging information with other research organizations, such as implementing machine learning models on open platforms.

Since the credibility evaluation of BIF needs to be done on a large scale for connections throughout the brain, we plan to study ways to streamline the process. We also plan to organize concepts related to BRA-driven development to help improve the description in HCDs.

While BIFs have been created for particular brain organs, we shall unify them into a single BIF and shift our method of describing individual HCDs based on it. In this revision, consideration will be given to facilitate HCD description useful for implementation.

We plan to proceed with the publication of relevant BRA data on eye movements, the claustrum, conscious architecture, and speech-language segmentation. We will also present BIFs for the amygdala at a domestic conference (Neuro 2022) and proceed with HCD data design for fear, etc. In addition, we plan to create a BRA related to higher cognitive functions. We will also promote the creation of open BRAs by encouraging the submission of BRA data through the Technical Committee on Neurocomputing of the Institute of Electronics, Information and Communication Engineers (of Japan).

This year, we plan to study issues in HCD integration, such as its efficiency and application limits, and determine a policy to advance it in a concrete manner. We will also present the status of these studies at a domestic conference (Neuro 2022).

We plan to determine standard calculation models to be implemented based on HCDs and to study how to convert from HCDs to the models. For BriCA, we will continue to improve usability. We also plan to verify biologically plausible implementations of cognitive functions that are important for AGI, such as working memory, which was the theme of last year’s hackathon.

In FY2022, we plan to present the Whole Brain Probabilistic Generative Model (WB-PGM) at a domestic conference in collaboration with Ritsumeikan University, OIST, Tamagawa University, and the University of Tokyo.
To construct a BRA useful for brain-based software development, we will proceed with the construction of a BIF that accumulates anatomical knowledge and assigns functional hypotheses based on specific tasks and functions using the SCID method (see §3.2). In addition, we will develop a technique to evaluate the neuroscientific validity of brain-based AGI with BRA to evaluate the implementation of brain-based software.

Budget for the fiscal year

The Whole Brain Architecture approach, in which we work, began in 2013, stimulated by the development of deep learning. Ten years will soon have passed since that time, and AI based on machine learning has indeed made great strides. And in recent times, we have seen news such as DeepMind’s Gato and Google’s LaMDA, which claim that AI has replicated the general characteristics of humans. However, we are still a long way from AI making political decisions or directing scientific research.

Therefore, we hope to facilitate the development of brain-inspired AGI by promoting the development of BRA-driven, which was created to embody the WBA concept. Currently, we are designing the computational functions by reverse engineering them to be consistent with mesoscopic anatomical structures using the SCID method. We plan to scale up this design activity as academic research activity and disseminate it to the field of computational neuroscience and other disciplines. Through these activities, diverse and fragmented functional hypotheses (HCD) will gradually accumulate. Therefore, integrating HCDs into software specifications stimulating the brain is a significant challenge. Integration may seem difficult due to its scale. Still, like a constraint satisfaction problem like a crossword puzzle, it is likely to have the property of being solved rapidly as it approaches completion. Therefore, at the end of its integration work, it is expected to converge to a single integrated HCD (= WBRA) in a relatively short period (poster).

While there are many obstacles to the completion of the WBA system, we hope to move closer to its completion through continuous efforts based on the above vision. Your understanding and support will be greatly appreciated.