The goal of the educational business is to help people who conduct research on the WBA approach on a long-term basis. In FY2017, WBAI held the third WBA hackathon and WBA seminars as continued activities.

In FY2017, WBAI held three seminars (in Japanese) with the following themes and speakers:

WBAI held its third hackathon in Tokyo for three days from September 16th with the theme of “Wake up, Hippocampus! Incorporating Hippocampal Models toward AGI Prototypes.”  Eight teams participated in the event and worked on the theme. As one of WBAI’s educational activities, this event aimed to improve the knowledge and skill of the participants and provide an opportunity for social networking among students and researchers.  The event received support from SIG-AGI of the Japanese Society for Artificial Intelligence, Grant-in-Aid for Scientific Research on Innovative Areas “Comparison and Fusion of Artificial Intelligence and Brain Science,” and MEXT Grant: Post K “The Whole Brain Simulation and Brain-like AI,” as well as additional backing from the Dwango AI Lab (Dwango Corporation).  Prizes were sponsored by Furuya Accounting Office and Vegitadigita.  The products of the hackathon have been published on GitHub.

The goal of the R&D business is to support research activities on the WBA approach.

WBAI is working together with other organizations to develop infrastructure for WBA research to make it public.  In FY2017, WBAI worked on a generic software platform for constructing WBA and infrastructure for neuroinformatics as explained below.

The integrated executive platform for constructing WBA supports a mechanism that performs cognitive functions while machine learning modules corresponding to brain parts communicate each other.  In particular, platform modules communicate with numeric vector values corresponding to signals transmitted in axons. In collaboration with Riken and Keio University, the effort to create this platform began in 2014. It was named BriCA (Brain-inspired Computing Architecture).  The development of Version 2 in C++ and Python to support a/synchronous communication was completed in FY2017.

Human-like artificial general intelligence (AGI) should learn and acquire skills in a world similar to that in which human beings live.  In cooperation with the Dwango AI Lab, WBAI was working on robot simulators in the virtual world as the learning environment for AGI. In FY2017, an environment for learning tasks related to the hippocampus and for evaluation was developed based on previously developed software called Life in Silico (LIS), which combines the Unity game engine and Chainer ML modules. 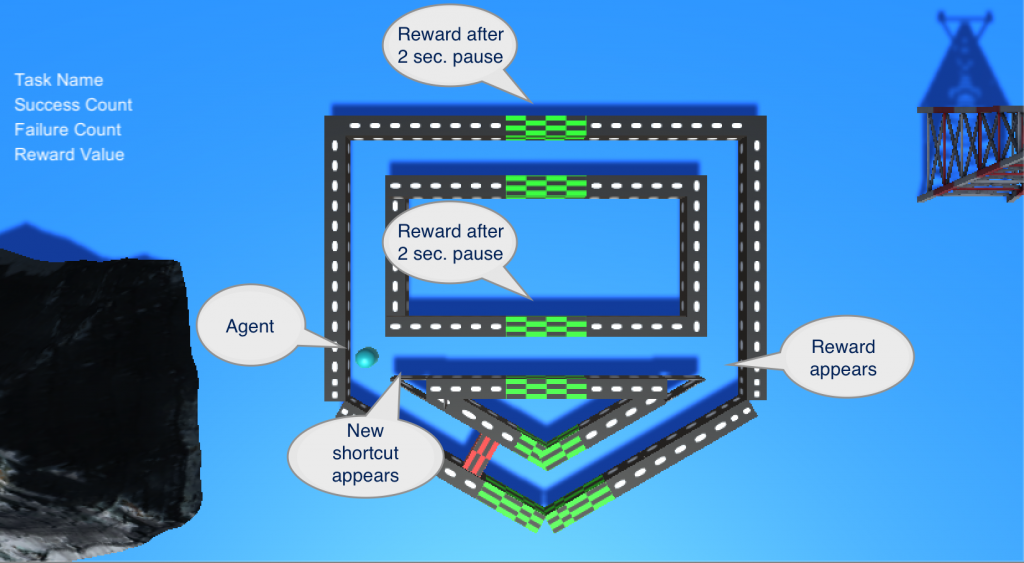 Fig.: The learning environment for the third WBA hackathon

Knowledge of the architecture of the entire brain is required to create AGI on the WBA approach.

For brain-inspired architecture, it is quite important to incorporate the standard algorithm of the neocortex, which exerts various functions with the same mechanism.  However, the algorithm is yet to be identified. WBAI decided on creating a domain model (the neocortical master algorithm framework) that specifies the semantics of the standard input/output of local neocortical circuits from the viewpoint of information processing, in order to lower the barrier of entry for engineers to enter WBA development.  In FY2017, researchers at WBAI developed it within the framework of the Kakenhi project “Brain information dynamics” and published a paper  [2].

Dwango AI Lab is working on connectomic informatics together with WBAI.  The project systematizes the findings on connectome (whole brain neural network wiring) in the form of ‘whole brain connectomic architecture.’  It gives constraints and directions for AGI development based on the WBA approach and easy-to-understand knowledge to AI/ML researchers and developers.  In FY2017, a paper was published on this subject [1].

In promoting R&D of AGI, it is important to have an overall view of the path to its completion.  A few researchers working on the WBA approach put up at a campus lodge to discuss how to make a roadmap in December 2017. They had a tentative conclusion that decomposing cognitive functions (capabilities) would be useful for creating a roadmap, and decided to continue discussions.

In FY2017, collaboration with researchers in areas like neuroscience deepened.  WBA researchers began receiving a financial aid from the Kakenhi project “Brain information dynamics underlying multi-area interconnectivity and parallel processing.”  We also collaborated with a team for symbol emergence in robotics to see the applicability of the middleware (BriCA) from WBAI.

Nov.2017: Project AGI, a research entity based in Australia, and WBAI signed off an open-ended Memorandum of Understanding (MOU)  to formalise partnership to promote R&D activities.

May 2017: Three members of WBAI attended to the Gatsby-Kakenhi Joint Workshop on AI and Neuroscience held at University College London.

Aug. 2017: A few of our members participated in the BICA (Biologically-inspired Cognitive Architecture) 2017 conference in Moscow to make presentations.  WBAI co-organize the conference and held a WBA session as in 2015.

Aug. 2017: A few of our members made presentation at Architectures for Generality & Autonomy (AGA 2017) workshop in the IJCAI (International Joint Conference on Artificial Intelligence) conference held in Melbourne, Australia.

Nov. 2017: Two of our members attended at the SfN (Society for Neuroscience) 2017 conference (Washington DC, USA) to make poster presentation on connectomic informatics.

WBAI aims at creating human-like AGI with the WBA approach to attain “the world in which AI exists in concord with human beings” and has been engaged in activities related to AI and society.  Our activities in FY2017 include the following:

WBAI activities such as WBA seminars and hackathons have been conducted with non-paid volunteers, except for two paid part-time workers at the secretariat.

The balance sheet and cash flow for FY2017 are presented below (Table 1 and Table 2).

The operations of WBAI have been financially supported by sponsors including private companies. (As of October 2018, it has sixteen sponsors consisting of enterprises and individuals.)  Two of the founding supporters paid fee for five years, as recorded as Advance Received in the balance sheet.

The expenses for office personnel (subcontractor and outsourcing fees) and rent of space have been divided proportionally (50/50) to the operating and administrative costs from this fiscal year.  The honoraria are paid to seminar speakers. The expenses for office personnel have been paid in the form of subcontracting and outsourcing. The remuneration is paid to an accountant office.