WBAI’s activities have been conducted with non-paid volunteers, except for a paid part-time worker at the secretariat.

The goal of our educational business is to help people who conduct research on the WBA approach on a long-term basis. In FY 2019, WBAI held three WBA seminars and the fourth WBA symposium.  We supported the Animal-AI Olympics 2019 (see below) and held two local technical meetups to promote the competition.

In FY 2019, WBAI held three seminars (in Japanese) with the following themes and speakers:

It was organized by WBAI and Panasonic Corporation, and supported by the Japanese Society for Artificial Intelligence, Grant-in-Aid for Scientific Research on Innovative Areas “Comparison and Fusion of Artificial Intelligence and Brain Science,” MEXT Post K Exploratory Challenge #4-1 “Understanding the neural mechanisms of thoughts and its applications to AI,” and MEXT “Brain information dynamics underlying multi-area interconnectivity and parallel processing”

In the symposium, the Award for Meritorious Service was presented to Takeshi Sakurada for his contributions to the establishment of the NPO and his advices on the financial, legal, and managerial aspects for the subsequent expansion of the organization.  Naoto Yoshida, who conducted research on agents, and Mr. Haruo Mizutani, who contributed to connectome informatics and created and operated the “Niconico AI School” to develop brain-inspired AI workers, were conferred the WBA Incentive Award.

We supported the Animal-AI Olympics 2019, a contest of attempts to replicate animal intelligence (sponsored by the Leverhulme Centre for the Future of Intelligence) and held two meetups for (potential) participants in Tokyo.  We also awarded the WBA Prize at NeurIPS 2019 to an application to the competition which had high biological plausibility.

The goal of our R&D business is to support research activities in the WBA approach.

Since FY 2018, we have been discussing the methodology for the development of brain-inspired AI.  In FY 2019, we designed the Brain Information Flow (BIF) Diagram, a description format for the Whole Brain Reference Architecture (WBRA), and developed a platform for building BIF databases. 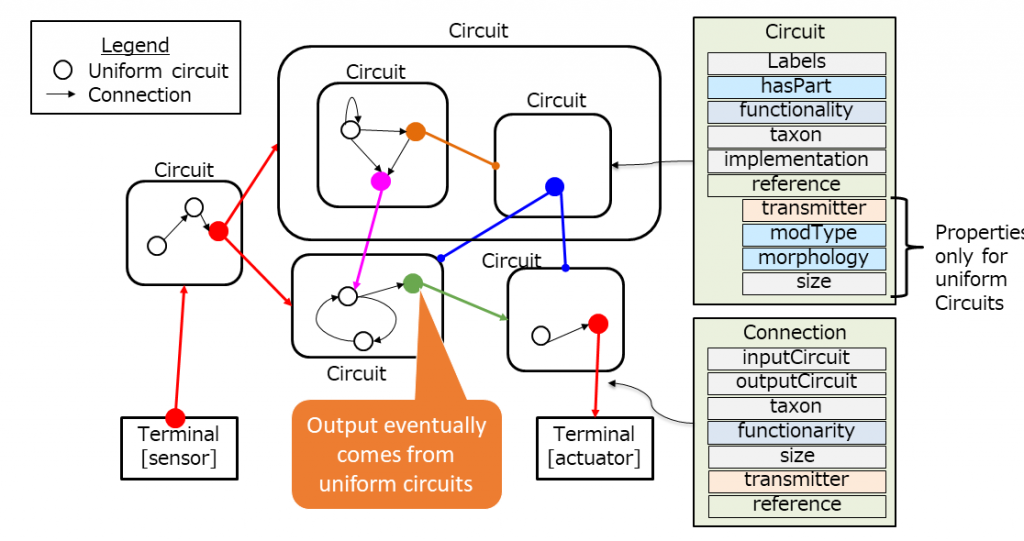 The BIF format was proposed to describe a hierarchical information processing in the brain, where Circuits represent networks in the brain.  Connections are set up between Circuits with outputs from the Uniform Circuit, which is a population of neurons of a uniform type.  In order to support detailed software design, the functions of Circuits and the signal semantics of Connections are annotated.

To evaluate brain-inspired AGI, we have published the GPS criteria consisting of functional generality, biological plausibility, and computational simplicity.  The criteria were used to evaluate the applicants of the WBA award at the Animal-AI Olympics.

We are collaborating with other organizations to develop research infrastructure to support research in the WBA approach.  In FY 2019, we conducted joint activities in the following R&D.

RIKEN has been developing an integrated software platform (such as technology to compensate for processing delays) for building WBA.

Establishing a foundation for neuroinformatics

The foundation of WBRA is anatomical (connectomic) structure of the brain.  The mouse connectome from the Allen Institute is the most complete mesoscopic connectome in mammals and we have been analyzing it through FY 2018 with its application to WBRA in mind [1].  However, as analysis of the data reveals connections that should not be present, we are doing further analysis of the data to extract reliable connections.

WBA development requires the description of computational functions on anatomical structures, and frameworks for brain organs such as the neocortex, hippocampus, and basal ganglia.  In FY 2019, we developed and formalized (in BIF) the framework for the basal ganglia, for which there is a relatively large amount of neuroscientific knowledge in terms of both structure and function (with the budget of WBAI).  When neuroscience knowledge is insufficient to determine a computational function, we need a hypothesis for it.  In FY 2019, we proposed hypotheses for the computational function with regard to attention and the basal ganglia [2][3], and for the path integration function of the entorhinal cortex [4].  Further hypotheses related to consciousness [5][6] and the semantics of signals within the neocortex [7] were also examined.

We developed a hierarchical prediction error model focusing on time-series processing, in line with the previously created neocortical Master Algorithm Framework [8] (mainly budget from the University of Tokyo with “Brain Information Dynamics”).

Voluntary groups around WBAI developed a time series decomposition algorithm and a reinforcement learning algorithm with it [9][10][11] inheriting the results of the former Dwango Artificial Intelligence Laboratory.

For the development of brain-inspired AGI, higher cognitive functions, such as planning, need to be realized. To this end, we conducted a survey on the mechanisms of planning in the brain [12] (budget from the University of Tokyo with “Brain Information Dynamics”).

The research of human-or-animal-like AGI agents is facilitated with 3D environments for agents to learn and be evaluated.  In FY 2019, the environment called PyLIS with PyBullet, which is relatively easy to modify (budget from the University of Tokyo with “Brain Information Dynamics”) was enhanced.

Five requests for research were compiled in FY 2019 by ProjectAGI, an AGI research organization based in Australia, which takes the WBA approach and partnered with us in 2017.  RFRs also have a role to show paths to the realization of AGI.

Because of the potentially large impacts of AGI on humankind, we are conducting activities to make it beneficial, safe, and democratized.  In FY 2019, we examined societal challenges in building brain-inspired intelligence [13], published a paper [14] from the point of view of how to utilize advanced artificial intelligence to overcome existential risks brought by the rapid development of new technologies and to find a way for survival.

The balance sheet and cash flow for FY2019 are presented below (Table 1 and Table 2).

The businesses of WBAI have been financially supported by sponsors or supporting members.  (As of March 2020, there were sixteen supporting members consisting of enterprises and individuals.)  Two supporting members at the foundation paid fees for five years in advance, which are recorded as Advance Received on the balance sheet.

Prizes/awards were paid as the WBAI Incentive Award and the WBA Award at the Animal-AI Olympics.  Conference expenses include the banquet fees collected from participants (recorded as Other income).  Honoraria and travel expenses were paid to the speakers of the WBA Seminars and Symposium.  While part of the Subcontractor/outsourcing expenses for operation includes the cost of research inherited from Dwango AI Labs, R&D were mostly carried out with the budget of exterior research institutions.

The expenses for secretariat personnel (shown in Subcontracting/outsourcing Expenses) were apportioned by 50% (50/50) for operating and administrative expenses.  The remuneration was paid to an accountant office.  The rent for the office was free of charge by courtesy of Garum LLC.