Our activities in FY2018 (from April 2018 to March 2019 — the fourth year) include educational and R&D businesses.  They were implemented according to our policy for FY2018. 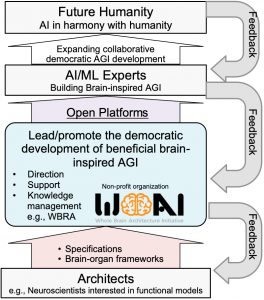 The goal of our educational business is to help people who conduct research on the WBA approach on a long-term basis. In FY2018, WBAI held the fourth WBA hackathon, a symposium, and WBA seminars.

In FY2018, WBAI held five seminars (in Japanese) with the following themes and speakers:

The symposium (in Japanese) was held at the Tokyo head office of Toyota Motor Corporation on August 29, 2018 with the theme “the path to good AGI by learning from the brain” with speakers: Hiroshi Yamakawa (Dwango AI Lab), Kenji Doya (OIST), Takashi Omori (Tamagawa Univ.), Satoshi Kurihara (Keio Univ.), and Hiroshi Nakagawa (RIKEN).  It was supported by Future of Life Institute, Good AI, Beneficial AI Japan, Japanese Neural Network Society, Dwango Co., Ltd., and the Japanese Society for Artificial Intelligence. At the symposium, Kazuma Kadomae, who has been involved in event photography, was awarded the WBAI Achievement Award, and Masahiko Osawa and Akira Taniguchi were awarded the WBA Incentive Award for modeling the hippocampus.

WBAI held its fourth hackathon for three days from October 6th, 2018 with the theme of “Providing AI with gaze control.”  Seven teams participated in the event and worked on the theme. The event aimed to improve the knowledge and skills of the participants and provide an opportunity for social networking among students and researchers.  The hackathon was prepared by the Dwango AI Lab and a prize was sponsored by Furuya Accounting Office.  The products of the hackathon have been published on GitHub. 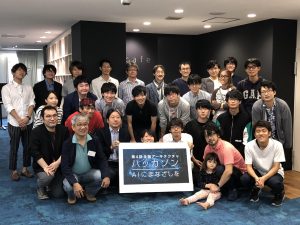 The goal of our R&D business is to support research activities on the WBA approach.  A major breakthrough in FY2018 was a prospective development methodology to overcome the human resource problem to create brain-inspired AI with expertises in neuroscience and AI/ML.  The research activities were carried out by the institutions/projects stated in the text below.

WBA development has been lacking human resources with multiple specialties.  The development methodology addresses the issue by creating division of labor [4].  As shown in Figure 2, the point is to provide engineers with “functional circuits” as specifications to be created by architects with neuroscientific knowledge.  A functional circuit corresponds to a partial structure of the whole brain reference architecture (WBRA) as a static reference model of the entire brain. Figure 2 illustrates a top-down development approach in which functional circuits required to solve specific task sets are created as specifications.

In promoting AGI R&D, it is important to have a view of paths (roadmaps) toward AGI.  For this issue, we collaborated with researchers from Dwango AI Lab., Keio University, and Tamagawa University to disassemble and organize the cognitive functions (capabilities) necessary for AGI (function map creation) [1].

Stub-driven development was conducted in the preparation of the fourth hackathon.

We are collaborating with other organizations to develop research infrastructure to support research in the WBA approach.  In FY2018, we conducted joint activities in the following R&D.

RIKEN has been developing an integrated software platform for building WBA [3].

Constructing WBA requires neuroscientific surveys on brain organs (e.g., the neocortex, hippocampus, and basal ganglia) and determining their basic circuit configurations (frameworks).  For the neocortex, we tried to apply a machine learning algorithm based on the Neocortex Master Algorithm Framework proposed in 2017 (mainly within the framework of the Kakenhi project “Brain Information Dynamics”) [2][5].  We also studied a framework for the hippocampus with Sophia University and Dwango AI Lab. [7].  A survey was made on the relationship among “conscious access,” cerebral networks, and decision making (with the Kakenhi funding of the “Brain Information Dynamics” project) [9].  The brain organ frameworks are also described as functional circuits with the development methodology, while we are currently taking a bottom-up development approach.

Establishing a foundation for neuroinformatics

Hands-on with an aphasia model were conducted in September 2018 and March 2019 under the initiative of Dr. Shin’ichi Asakawa (Tokyo Women’s University).

The research of human-or-animal-like AGI agents is facilitated with 3D environments for agents to learn and be evaluated.  In FY2018, we made a prototype environment called PyLIS with PyBullet, which is relatively easy to modify.

Five requests for research were compiled in FY2018 with ProjectAGI, an AGI research organization based in Australia, which takes the WBA approach and partnered with us in 2017.  RFRs also have a role to show paths to the realization of AGI.

In FY2018, we supported the Biologically-Inspired Cognitive Architecture (BICA) conference, which has a high affinity with the WBA approach, in the form of a donation (US $ 845).  At BICA2018, we announced the development methodology as a WBA-related study [1].

A WBA symposium was held at the 28th National Conference of the Japanese Neural Network Society (JNNS2018) in August 2018 (proceedings).

Because of the potentially large impacts of AGI on humankind, we are conducting activities to make it beneficial, safe, and democratized.  In FY2018, the following activities were conducted.

In an event at Beneficial AGI 2019, an international conference to discuss the future of AGI, Yamakawa made a presentation titled Specifications of brain-inspired AGI development for everyone.  In a session of the Japanese Neural Network Society, he described the path to democratically develop brain-inspired AGI [9].  He also appealed for the need to be prepared for how to handle powerful AGI in Bulgarian television broadcasts.

[5] Miyoshi, K., Arakawa, N. & Yamakawa, H. (2018) Do top-down predictions of time series lead to sparse disentanglement? In the proceedings of the 28th Annual Conference of the Japanese Neural Network (JNNS2018)

WBAI activities such as WBA seminars and hackathons have been conducted with non-paid volunteers, except for two paid part-time workers at the secretariat.

The balance sheet and cash flow for FY2017 are presented below (Table 1 and Table 2).

The revenues were 6,948,353 yen and the expenditure totaled 1,469,956 yen for administration and 2,930,757 yen for operation.  Expenses for administration and operation have not changed much from FY2017. Most of the operating expenses were spent on public relations and education, and no R&D expense was recorded (R&D were carried out with the budget of exterior research institutions).

The businesses of WBAI have been financially supported by sponsors including private companies. (As of July 2019, there were seventeen sponsors consisting of enterprises and individuals.)  Two supporting members at the foundation paid fees for five years in advance, which are recorded as Advance Received on the balance sheet.

Meeting expenses accounted for a large portion in FY2018, due to not having the expenses balanced out with the fees collected from the meeting participants, which are recorded as Other Income.  The travel expenses were mainly for the hackathon participants. The honoraria were paid to the speakers at WBA seminars.

The  expenses for the office personnel are shown as Subcontracting/outsourcing Expenses.  The rent was paid to Dwango Co., Ltd. The remuneration was paid to an accountant office.  The expenses for secretariat personnel and rent were apportioned by 50% (50/50) for operating and administrative expenses .