Artificial General Intelligence (AGI) is more than just a tool; it is a technology that will dramatically expand our options for the future.  Since its founding in August 2015, the Whole Brain Architecture Initiative (WBAI) has been promoting long-term educational and R&D projects to create human-like AGI by learning from the architecture of the entire brain, with the goal of completing it around 2030.

Last year, we started WBA Lectures to spread the technology accumulated by WBAI, with the themes of: “Decomposition method of cognitive functions along the brain structure”  (in Japanese),
“Orientation for the 5th WBA Hackathon: to create your working memory model work,” and  “Experiences in building a brain-based machine learning model”  (in Japanese).  Two conventional WBA Seminars were also held (in Japanese) with the themes of “Cognitive Development and Developmental Disorders based on General Principles of the Brain” and “Is Biologically Plausible Agents Interaction Promising?

The 6th WBA Symposium was held (in Japanese) in October under the theme of “Towards Brain-based AI that Coexists with Human Beings” in light of the impact of AGI.  In the panel “How can we land in the palm of AI’s hand?,” we discussed the nature of the future society based on the premise that advanced AI, surpassing humans in terms of autonomy and ethics, will intervene between human beings.

In the Symposium, we presented awards for contributions to activities around WBAI.  The WBAI Incentive Award was given to Ayako Fukawa, for her initiative in the research to construct the brain reference architecture (BRA).  The Awards for Meritorious Service for the NPO were given to Naoyuki Sakai for his contribution to public relations, and to Satoshi Ueno for his contribution to the establishment of the Committee for WBA Seminars.

The Significant Contribution Award for the Working Memory Modelathon was given to Jeremy Gordon in March, as his contribution stimulated the development of methods for assessing biological plausibility, and the Fifth WBA Hackathon to implement working memory was held online from May 2021 to October.

Over the years, various activities have been continued with the support and cooperation of people, including supporting members, the Committee for WBA Seminars, SIG-WBA, advisors, and partner organizations.

In BRA-driven development [1], the core activity of the WBA approach, hypothetical component diagrams (HCDs) that represent hypotheses for computational functions, are associated with brain information flow (BIF) diagrams that represent the anatomical structure of the brain, and then software is implemented by referring to HCD.  In this way, BIF, HCD, and software are developed step by step from a partial construction to the whole brain by 2030, where we may have almost reached AGI, although there may still be some issues left to complete.  Thus, the main theme for WBAI will be how to contribute to the vision of “a world in which AI exists in harmony with humanity” through open development and promotion of BRA design (mainly HCD creation and integration) by contributors. 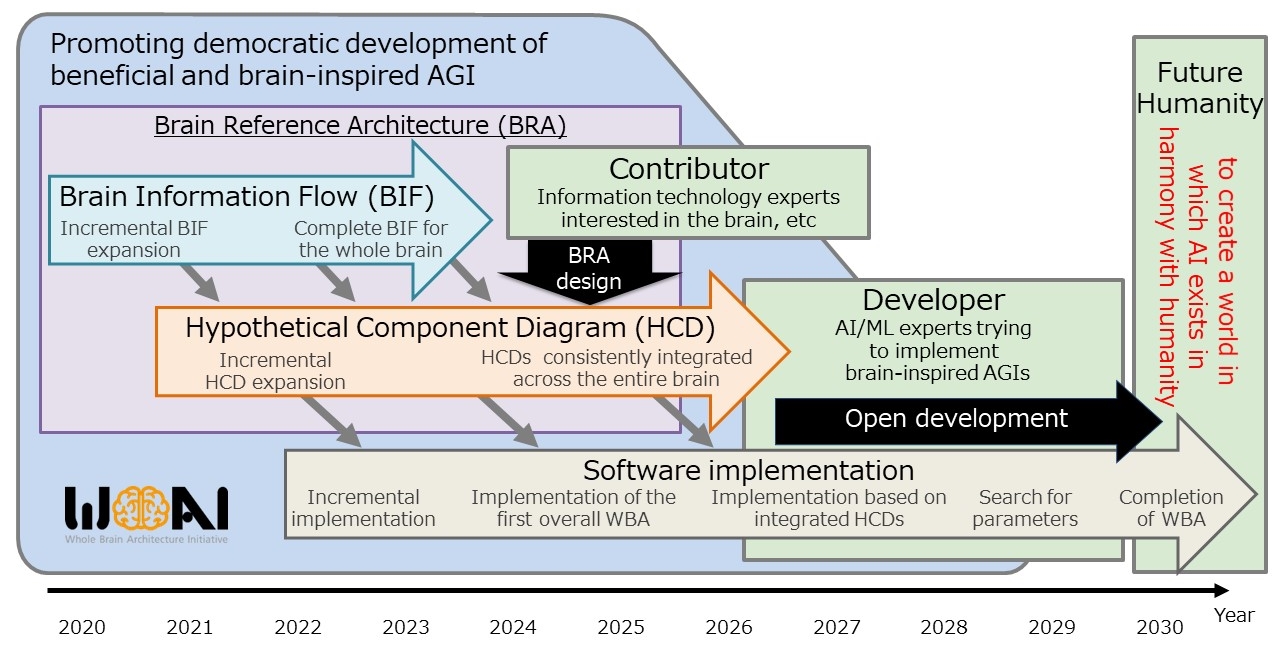 Nearly 100 organizations are working to build AGI from different approaches around the world [2].  Many of them are aiming to achieve AGI as an extension of large-scale machine learning such as Transformer and Foundation Models, which have been developed recently in the field of deep learning.  While some of the organizations may realize AGI by 2030, we believe that the WBA approach, which has established a methodology for extracting the essence of intelligence from the brain, the only existing general intelligence, is a promising option because it can steadily advance development as described in the roadmap above.  Even if non-brain-based approaches are to take the lead, brain-based AGI will still provide value, such as applications in interpersonal interaction, modeling of mental disorders, and mind uploading.

In 2022, we would like to revitalize our activities by focusing on the full-scale production of BIF and the expansion of HCD production.  We look forward to your continued support and patronage in the coming year.